Julian Assange in Court on Wednesday … Hillary Clinton in Sweden on Sunday … Rally4JA 5/30-31! 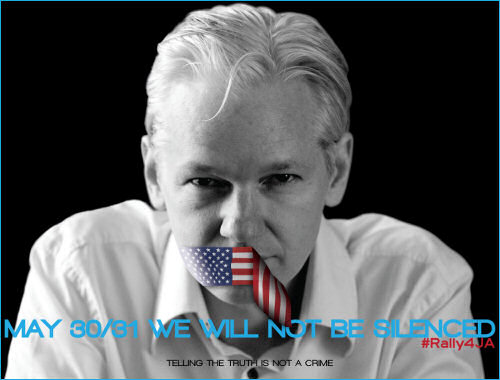 JULIAN ASSANGE IN COURT ON WEDNESDAY … HILLARY CLINTON IN SWEDEN ON SUNDAY … RALLY4JA 5/30-31!

On Saturday May 26 Sweden’s Minister of Foreign Affairs Carl Bildt tweeted the following:

“We will warmly welcome Secretary Clinton to Stockholm next Sunday. First bilateral visit to Sweden by a US SecState for a very long time.”

The timing is telling, as one day earlier WL Central reported the following:

“The UK Supreme Court will decide whether or not Julian Assange is to be extradited to Sweden on May 30, at 9:15AM. The proceedings will be open to the public and will also be live-streamed via the Sky website. The judgment is expected to last around 10 minutes.”

“If the court rules to extradite Mr Assange, he will be sent to Sweden within 10 days. He can appeal further to the European Court of Human Rights, though this will not stop his extradition. Julian Assange has not been charged with any crime in any country, yet he will have spent 540 days detained – 10 in solitary confinement, and 530 under house arrest – by the time the verdict is handed down. Sweden is trying to extradite him for the purpose of questioning, but they have refused all offers to question him via telephone or video call, despite it being a completely legal method under Swedish law. If extradited to Sweden, Mr Assange will be immediately placed in prison, incommunicado. He will be held in solitary confinement, which the UN Rapporteur on Torture stated amounts to cruel, inhuman or degrading treatment in excess of 15 days. Since Sweden does not have a bail system, he will be held for an indefinite period of time. If charged, the following trial would be held in secret.”

“Julian Assange also faces the risk of being further extradited to the United States. Sweden has a “temporary surrender” mechanism in their extradition treaty with the U.S. which sidesteps traditional extradition safeguards. Sweden has not refused an extradition request by the U.S. since 2000. It must be noted that Mr Assange is still at risk for U.S. extradition even if he is not sent to Sweden. Emails from the intelligence company Stratfor revealed that the U.S. has a sealed indictment against Julian Assange, and a secret grand jury on WikiLeaks has been active in the U.S. since September 2010. Both the UK and Sweden have refused to guarantee they will not extradite him to the U.S.”

“Christine Assange [@AssangeC], mother of WikiLeaks founder and Editor-in-Chief Julian Assange, has spent many long months reaching out to supporters and urging them to contact their local political representatives. Recognising that many politicians still do not know the true story behind WikiLeaks and her son’s legal battles, she asks supporters to give them the facts and request their assistance.” Here are her 91 talking points:

Protests and rallies in support of Julian Assange [#Rally4JA] are scheduled worldwide this week. Date, time and location information plus downloadable graphics from @somersetbean are available here: