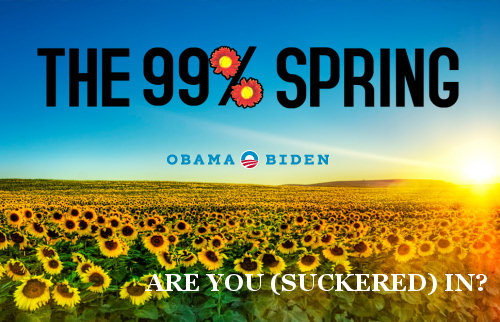 Is “Spring99%” a rejuvenation of Occupy Wall Street, or a false flag psyop aimed at absorbing OWS into the elite-controlled, false-choice Demopublican facade?

IS THE 99% SPRING INITIATIVE AN ATTEMPT TO ABSORB THE OCCUPY MOVEMENT INTO THE CORPORATE-CONTROLLED TWO-PARTY SYSTEM?

Here you will find the letter that launched the “99% Spring” initiative and the signatories of the 40 organizations who are openly behind it:

There is no question that Justen Ruben’s MoveOn.org, Van Jones’ Rebuild the Dream and many if not most of the other groups listed there have ties to the Democratic Party and the Bushbama re-election circus. Consequently, it would be prudent for all concerned to question the real agenda behind 99% Spring, as many are:

“There are accusations from Occupy folks that Spring99% is trying to co-opt the OWS movement. That MoveOn is a front for the Democratic Party. And there are denials both from activists within the Spring99% network and members of the Occupy movement itself. It is a needed debate, even though it’s probably under the radar for many progressives and irrelevant for mainstream politics – except for the accusations that Spring99% is a front for the Obama re-election campaign. Meanwhile, paranoia of being co-opted has been a mainstay within the anti-Wall Street movement for months.”

“In an interview, activist and author John Stauber – who founded the Center for Media and Democracy in 1993 and ran it until 2009 – laid it out: ‘Democratic donors and unions have – since the 2000 Nader/Gore/Bush election – flowed millions of election year dollars into non-profit organizations and liberal media to rally progressives and create an echo chamber that can impact politics in favor of Democrats… 99% Spring’s activities will surely be carefully and quietly coordinated behind the scenes to have a maximum positive impact in defeating Republicans and re-electing President Obama,” he continued. “These groups will claim independence from the 2012 Democratic campaign agenda, but the fact is that funding will flow to them simply to create buzz and the appearance of a movement that dovetails perfectly with Obama’s campaign rhetoric.'”

Clearly, Stauber suspected Spring99% to be a false front. Charles M. Young attended one of their “nonviolent direct action training” sessions this week, and brought back ample proof that it is:

“The first clue… was the sign-up table, where there were a bunch of Obama buttons for sale and one sign-up sheet for the oddly named Community Free Democrats (are they free of community?), which is the local Democratic clubhouse. That killed the ‘inspired by Occupy Wall Street’ vibe right there… Over half the crowd left early. Most of those who stayed appeared to be angry and mystified that they had received no training whatever in nonviolent direct action. I doubt that the Democrats or MoveOn succeeded in co-opting anyone, and I predict that they will be inventing more dreary front groups as the election year grinds onward.”

I have not attended – and I refuse to attend – any 99% Spring or other Demopublican indoctrination sessions. I would never waste my time charging windmills with third parties, but neither will I allow them to sucker me back into the two-party fold. I have been actively supporting the Occupy Movement since day one (9/17/2011) … Morpheus gave me the Red Pill in Washington DC two years before that (9/11/2009) … and I’ve been waging a personal rebellion against the Kleptocracy empowered by 9/11 ever since. And based on what I’ve seen first-hand in venues like the OccupyWallSt.org Forum, if I still had any left I would bet my entire savings that Spring99% was not the first and will not be the last attempt by the corporate fascist elite and their puppet president Bushbama to co-opt OWS. AdBusters says much the same:

This document may contain links shortened using http://tinyurl.com to facilitate emailing. If you are concerned we might use them to cloak phishing or malware, we recommend you open them with this: http://longurl.org. Also our thanks to the mobile web designs, mobile web designers and mobile web developers that support our efforts.